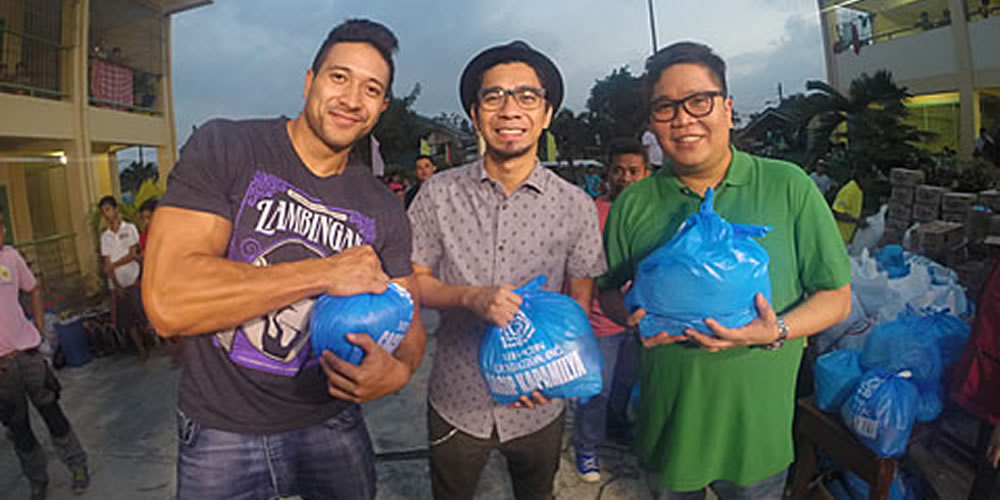 The network’s main public service arm is the ABS-CBN Lingkod Kapamilya Foundation Inc. (ALKFI). Established in 1989 as ABS-CBN Foundation, it has been at the forefront of implementing development programs in the areas of child care and protection, education, environment, disaster management and community development.

In the past, the foundation has been known for its groundbreaking moves such as the E-Media educational TV shows (“Sine’skewla,” “Hirayamanawari,” “Math Tinik” and “Epol/Apple”), its media-based child-caring program Bantay Bata 163, the Bayan Microfinance program for poor enterprising Filipinos, the media-based environmental program Bantay Kalikasan, and the Bayan Ni Juan (relocation) communities for disaster survivors.

In 2013, ABS-CBN Foundation was renamed to ABS-CBN Lingkod Kapamilya Foundation Inc. (ALKFI). The new name captures the compassionate and personalized public service that the company advocates. More and more, ALKFI’s programs and projects exemplify this advocacy.

A Roof Above their Heads

For instance, ALKFI partnered with the Philippine National Bank for YesPH — Young and Empowered Students of the Philippines. YesPH aims to instill the importance of saving in a bank while one is young.

This project, carried out in three phases includes a training camp, an interschool competition and awards for the schools with the most number of newly-opened accounts and the students with the biggest deposits.

In August 2015, ALKFI, together with the Lopez Group Foundation (LGFI), turned over the Dayap Elementary School Annex in Calauan, Laguna. ALKFI and LGFI worked hand in hand for the repair works of the said building whose users are students from families that were affected by Typhoon Ondoy and the rehabilitation of the Pasig River.

The Dayap Elementary School is located in the BayaniJuan community of Southville 7, home to more than 5,000 families—1,700 families of which were from Estero de Paco and Estero de Pandacan in Manila. ALKFI, through its project partners, has built shelters and community facilities in the said area. It also implements programs related to local governance, health, livelihood and skills development and solid waste management, that are all essential to the growth of the Southville 7.

In addition, ALKFI—through Sagip Kapamilya—turned over four classrooms. It donated one classroom each in Sta. Rita I Elementary School, Samar, and the UP School of Health and Sciences, Tacloban, and two classrooms to the Tabunan National High, Borbon, Cebu. The buildings are part of a bigger scheme for the rehabilitation of areas affected by Super Typhoon Yolanda.

The classrooms are based on designs by the Development Corporation and Department of Education. With their high ceilings and solid frames, these structures can withstand typhoons. The design also allows for use as evacuation centers during calamities.

Aside from the daily feeding, adults in the community were trained to become the school’s bakers, helpers and vendors. The fortified bread were be sold and the profits from the sale used for the continuation of the bread feeding program.

ALKFI’s partners in this endeavor were the Nutrition Center of the Philippines and San Miguel Flour Mills.

In recent years, DZMM has created very one-of-a-kind public service programs that are given for free to beneficiaries.

DZMM’s Buntis Congress is one of its very successful and most awarded intiatives. Every year since 2002, DZMM gathers expectant moms to educate them on pre and post-natal care. The Buntis Congress has been mounted from Luzon to Visayas to Mindanao.

In July 2015, over 290 pregnant women from Bulacan took part in the congress. They were given information about proper nutrition and healthcare during and after pregnancy. The Buntis Congress also promoted the importance of breastfeeding.

Experts from the Department of Health and the Regional Population Office, as well as OB-gyne Dra. Besilda Salvador (host of the radio show “Dra. Bles @ Your Serbis), were the resources persons.

At the end of the whole-day event, the moms took home souvenirs for themselves and their soon-to-be born babies. A raffle of premium items like strollers and cribs, plus song numbers by celebrities, enlivened the afternoon.

In 2015, DZMM also conducted a special activity for the lolos and lolas at Anawin Lay Mission Foundation in Rodriguez, Rizal. The seniors were given care and attention by way of medical consultaions that inlcuded hearing tests, cautery and diamond peel, and eye check-up.

The project was a way for DZMM and ABS-CBN talents to help. Radio personalities like Ahwel Paz and Winnie Cordero hosted the event pro bono. Teen star Mika dela Cruz serenaded the seniors.

For 2015, the TLC caravan brought volunteer nurses and doctors to Paradise Farms Community School in San Jose del Monte, Bulacan. About 400 underprivileged citizens benefited from the visit. A number of them were given free dental extractions and derma consultations. Patients 40 years old and above were given free reading glasses.

Meanwhile, the kids were treated to story-telling sessions by Franco, Jimboy and Bailey of Pinoy Big Brother.

Into the Christian World

Perhaps two of the most unique CSR efforts that ABS-CBN conducted in 2015 were the soup kitchen and Binyagang Bayan organized by ALKFI in cooperation with the teleserye “Nathaniel.”

For the Binyagang Bayan held at the Sacred Heart of Jesus Parish in Kamuning, ALKFI and the production team partnered with DZMM.

Together with four other priests, Rev. Father Tito Caluag officiated the baptism of 51 selected babies whose parents are employees of ABS-CBN’s janitorial service provider EGSI; and Barangays Payatas North Fairview Batasan, Payatas B and Culiat; and unwed mothers from Nazareth Home and Grace to be Born.

Members of the teleserye’s cast led by Gerald Anderson served as the godparents of the babies.

These are just some among the many, many ways that ABS-CBN shows its love and care for Kapamilyas.

ABS-CBN’s public service endeavors certainly do more than respond to disasters and requests for medical care; they empower the marginalized, develop a more sustainable environment, provide long-term solutions to problems—and embrace the entire humanity as a family member.